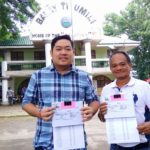 Municipal officials and employees were all negative in their drug test results. This was announced by Dolores Mayor Robert Victor Seares, Jr. in today’s flag raising ceremony. “We would like to thank everyone who cooperated in the mandatory drug testing. Though it is mandatory, I appreciate that you all voluntarily obliged without hesitation” said Mayor continue reading : Dolores municipal officials and employees found negative of illegal drugs