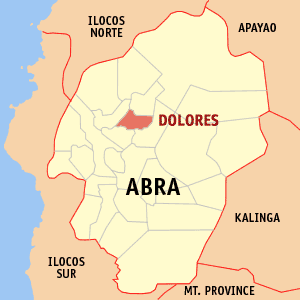 The Municipality of Dolores lies in the central western part of the Province of Abra.  It is approximately within the 120o 50’ east longitude and between 17o 34’ and 17o 40’ latitude.  The municipality is bounded by the following:

The Municipality of Dolores has a Type 1 climate under the Coronas classification and is characterized by pronounced seasons, dry from November to April and wet the rest of the year.  The maximum rainfall was observed during August, while minimum was during February. The mean annual air temperature is 27ºC.  The hottest month is May (28.8ºC), while the coldest is January (25ºC).