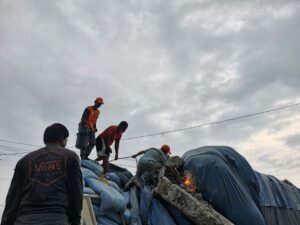 The decade old Dolores Welcome Arc situated at Barangay Mudiit, Dolores, Abra had to be demolished today after a trailer truck collided with it.

Initial investigations showed that the truck was overloaded with over a thousand sacks of certified seeds which was making its way to the towns of Dolores and Lagangilang, under the Department of Agriculture’s project.

Mayor Conde Turqueza, who is an Engineer himself, led the demolition with a team composed of personnel from the Department of Public Works and Highways (DPWH), the Municipal Engineering Office, and the Municipal Disaster Risk Reduction and Management Office. The Dolores Municipal Police and few volunteers helped in managing the traffic which had to stop for about 2 hours for the operation.

Fortunately, no one was injured due to the accident. The driver of the said truck has already been brought in at the Dolores Municipal Police Station for questioning and documentation. According to Mayor Turqueza, the LGU would still put up a welcome sign at the border, but one that will be pose less risk to travelers.